March 21, 2018
I'm a recipe hoarder, or as I like to say, collector.  Collector sounds so much better than hoarder don't you think?  Regardless, of hoarding or collecting, I've spent all of my adult life searching for the perfect way to organize and store my stash. 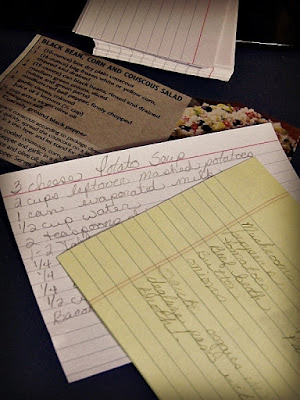 I started with index cards and a small file box, which I quickly outgrew once I was married.  I moved into card file boxes, organized by type and separated into "tried" and "to be tried" boxes.  If you're new to here then you might not know I used to write a food blog, but that was in another life.  No, don't leave and go Google it.  It's gone.  I deleted it.  Anywho...from two long card file boxes, I moved into binders, which I still use today.  However, those binders don't even come close to holding it all.  I still have stuff all over the place.

Several years ago I bought some recipe software.  I was going to get organized and put all my recipes into it.  Fast forward 10 years and here we are with binders and software, some overlap in both.  In the midst of this came the advent of Pinterest.  Yep, you guessed it, there are recipes pinned on Pinterest, most of which I never revisit after pinning.  I also have a few handfuls of recipes on Google drive, from making recipes printable for the old blog.  Some of these are printed and in the binders, but many of them are just trapped in Google drive forgotten and alone.

Then there are the notebooks I scratch ingredient lists into with one or two cryptic lines of text that are supposed to be directions for a repeat of the creation.  No one else can decipher these recipes, but they're on the list of "someday I'll get them written out for other people to use".  Who knows when that will happen.

We haven't even talked about the cookbook collection that is hiding in my cupboards.  Yes.  Dozens of them, which I keep saying I'm going to sort and purge (insert wicked laughing here).  I have this problem, I love to read cookbooks like novels, but rarely do I make any of the dishes.  Some cookbooks I keep solely for one or two recipes.

I need to get all of these darn things into one working format, which I really think the most functional form is the binders.  Binders aren't pretty, but they are functional.  We've talked about going digital, but who has the time to find the right way to do that and get it all into one digital keeper?  Besides, I'm a messy cook and it's much easier to wipe off a recipe in a sheet protector than it is to wipe off a digital device.

Do you suffer from this affliction?  How do you corral your recipes into a manageable form?
Food & Recipes

Jefferson School - Missouri ( 28 July 2008) It’s vacant now; the school at the corner of Franklin and Orchard streets, but that morning as I stood, on what remained of the playground, the laughter of school days gone by could almost be heard. The blacktop has faded and the markings for hopscotch have paled with the sun, but the L shaped red brick building stands silent and alone. Of what once was a pair of swing sets, only poles remain, the framework from which swings once hung. Were the swings removed for safety or stolen by vandals, I do not know, but I can tell you no children play there now. Jefferson School - Missouri (28 July 2008) There is a chain looped through door handles, of a double door, on the south side of the school, locked by padlock. Signs remain telling visitors to STOP, Teachers lounge, go to the main entrance. Many window panes bare the scars of a vandal’s rock thrown. Spray paint mars the walls of the lower level on the north side. Blinds are draw