April 10, 2019
Let me start by first saying this is an unsponsored review of a product I recently purchased and enjoyed.  I thought it would be worth sharing my thoughts with all of you.  Let's start with the basics... 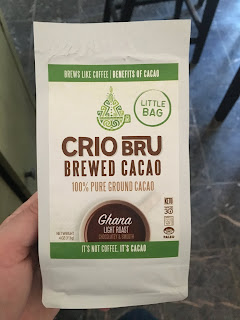 Crio Bru is not coffee, it's made from cacao, also known as cocoa beans.  The beans are roasted, ground and brewed the same as coffee.

I ordered the Little Bag Bundle for $12.95, which is two (4 ounce) bags of two different roasts.  This seemed like the perfect way to try Crio Bru without a big investment.  The tagline at the top of the website says "jump into dark chocolate heaven" and I won't lie if you don't like dark chocolate don't bother.

When we tried our first tasting, I used our French Press to make it, as suggested in the brewing instructions on the back panel of the package.

I liked it better than hubby did, but I'm a dark chocolate lover.  I'm one of those people that enjoys 70% cacao and higher in my dark chocolate bars.  I think it would also be reasonable to say I think since it was cocoa beans, hubby might have expected somewhat of a more "hot cocoa" experience from it.  He added a bit of agave and said it was something he was glad we tried.  I enjoyed it without sweetener but did add a bit of whole milk after a few sips. While I enjoyed it with the milk if I'm honest I preferred it "black".

Hubby and I talked about brewing it half and half with coffee, which will be happening in the future.  We also talked about it not being a daily thing.  In our defense this had nothing to do with the taste of the Crio Bru, it was more about us loving our coffee too much to leave it behind.

In my opinion, the flavor is rich and very dark chocolate in taste.  I will absolutely order it again, even though it won't replace my daily coffee.  I would be interested in trying some of the other roast options.  I savored having something like a flavored coffee that actually tastes as good as it smelled.  I also enjoy the idea that this little beverage could be a stand-in for some of my chocolate cravings without all the added sugar of hot cocoa mix.

My final thoughts.  I would recommend Crio Bru to anyone who fancies dark chocolate, is looking for a caffeinated beverage option as an alternative to coffee or tea, or enjoys having new culinary adventures.