May 11, 2020
I've spent the better part of the last 13 years looking for the perfect biscuit recipe because I was tired of making do with crappy biscuits.  Anyone who really knows me knows the soul purpose of a biscuit in my life is to create the bed for which my sausage gravy will rest.  Those rare times we eat breakfast out hubby always teases "what are you gonna have, if there's no biscuits and gravy?"  Biscuits and gravy is, hands down, my favorite breakfast, so a good biscuit is essential. 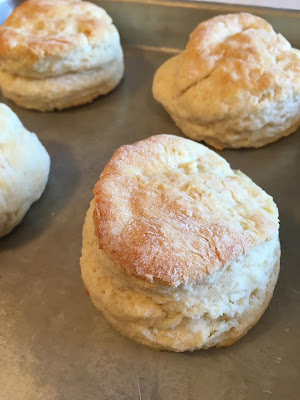 I learned to make the sausage gravy years ago, but the biscuit was kind of an afterthought.  I started with the biscuits in the can, fondly referred to as whop 'em biscuits.  Then there was the biscuit mix phase, not bad but I wanted more out of a biscuit.  After that I went through the homemade biscuit mix phase, always dense and never fluffy.  I even tried a handful of "from scratch" recipes out of cookbooks and from websites, never satisfied with the results.  Then, a couple of years ago, when I stumbled onto a King Arthur Flour recipe, that's when the magic started to happen.  Before I found I found King Arthur Flour's Never-Fail Biscuit recipe,  I was the Goldielocks of the biscuits.  This one's too dense, this one's not flaky enough...and the list goes on.

The recipe adaptation happened as follows.  I measured the flour into a mixing bowl.  Then cut in the cold butter, much like you would for pie crust or any other pastry dough, until I got a fine crumb mixture.  Once I had crumbs I added the milk.  Magic happened and I haven't made biscuits any other way since.  That was almost two years ago.

The end result of this recipe is light, fluffy, flakey baked clouds of goodness.  The bottoms crisp up golden brown without becoming too hard to cut.  The tops turn a lovely golden brown on all the rough and craggy edges.  These really are never-fail biscuits and as long as you keep some self-rising flour in your pantry you can always make biscuit magic.

If you're looking for the perfect biscuit I'd encourage you to try my recipe for Biscuits.  Enjoy!