May 28, 2020
I've always wanted to make yogurt, but many of the recipes seemed so daunting and overly involved.  Then a few weeks ago my foodie friend in Texas sent me a yogurt recipe and kept encouraging me to try it.  She'd made it and it was amazing and tasted so good.  I printed the recipe and then it laid on the kitchen table until a week ago.  I finally got off my lazy excuses and made it. 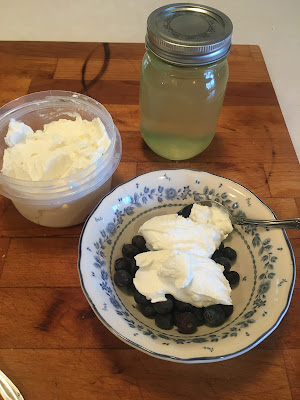 It took me about 45 minutes to put the initial part of the yogurt together.  Then it was all about the waiting.  I opted to use our Excalibur Dehydrator on the 115° setting, per the instructions in my manual, instead of using the oven to keep it warm while it "incubated" and became yogurt.

I chose to use my large glass bowl because it has a lid, and I knew I'd be straining it.  It took about 8 hours in the dehydrator.  I think using the towel in the dehydrator slowed the process some and just dried the towel out.  The next make I will opt to leave the towel out of the equation.  I'll be making this again, for sure.

I used Dairygold Whole Milk which has 3.25% milk fat and Fage (pronounced fa-yeh) Total Plain 5% which is Whole milk Greek yogurt.  Fage is my all-time favorite Greek yogurt because it's full fat, thick, and so creamy.

I was thrilled to have similar results with my first homemade yogurt.  Especially since I can't buy Fage in our small town, it's always a special item I grab when we go to "town" for things.  I did stain this mixture for about 14 hours to get the super thick creamy results I got.  I simply put it in the strainer and plopped it in the fridge until the next morning.

I haven't done a serious cost breakdown, but I'm fairly certain that my homemade yogurt cost me much less than the $5 I usually pay for the Fage.  If you're looking to try making yogurt, but have always been intimidated by the recipes you've read I highly suggest you try this one from Live Eat Learn.  Easy, clear directions.
Food & Recipes Recipe Reviews