June 01, 2020
We’ve been busy since my last update, including some outside planting.  I'm relishing the fact that this year we can actually devote our time and energy to growing a garden this year.  Alaska isn't an easy place to garden.  There seem to be two kinds of summers here - wet and rainy or hot and smokey.  Hot summers bring a lot of forest fires to our state.  Our growing season is short and on a good year it can be amazing, but during a rainy year it can be a total bust.  Here's hoping this year is a good one. 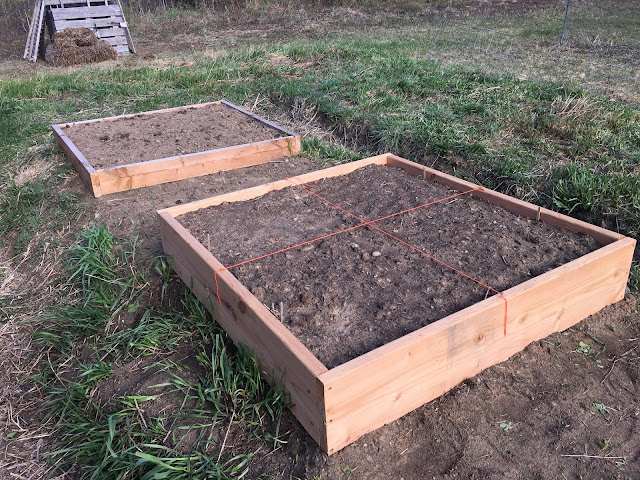 We’ve built two 4 foot square beds and I’ve planted our root crops in one of them.  I’m trying beets and rutabagas for the first time, along with some parsnips and the obligatory carrots.  I’m pretty sure we’re the only people I know that grow carrots primarily for their dog.  Hedy loves carrots way more than her people do.

The second bed will hold our transplants of cabbage, pumpkins, maybe some cucumbers, and hopefully some celery.  The celery seeds haven't come up yet, so I may have to replant and try again. 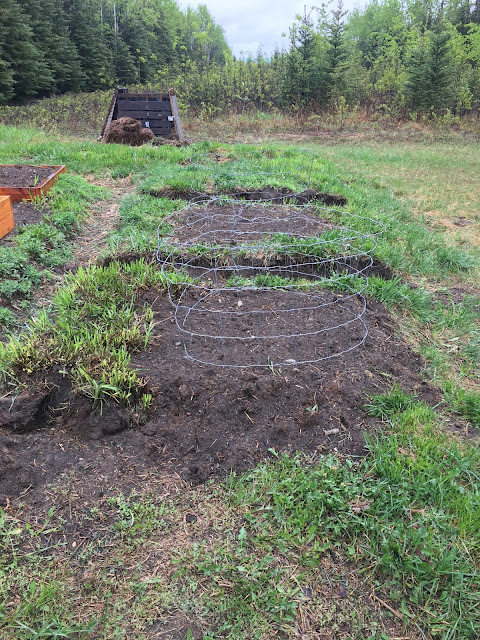 We're in the process of turning the grass over and building our potato towers in that area.  I built four towers this year from hog wire, they're about two feet tall by two feet around.  There are two more towers to prep and put in place.  Hopefully, by the next update, you'll be reading about potatoes being planted. 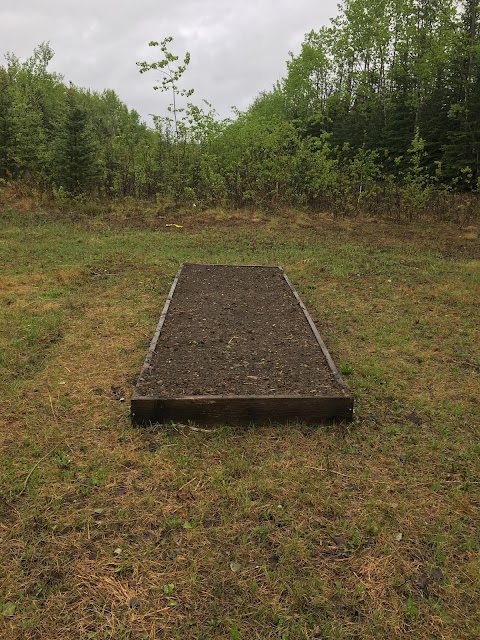 I know it doesn't look like much right now but Hubby got the corn planted in the large raised bed.  We've not grown corn in Alaska before, but the garden season wouldn't be complete without an experiment or two.  The variety we got is from Colorado and is a variety for cold weather, so here's hoping we end the season with corn. 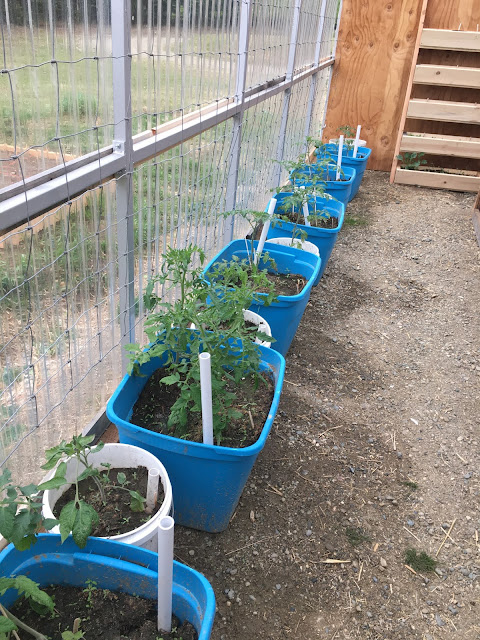 Our tomatoes are coming along and a few of them are starting to bloom.  I've learned how to better prune my plants for better yield this year.  I've also learned that our plants are all indeterminate.  Here's hoping we get some red ripe tomatoes throughout the season this go-round.  We have five varieties so there should be some good tomato eating in our future. 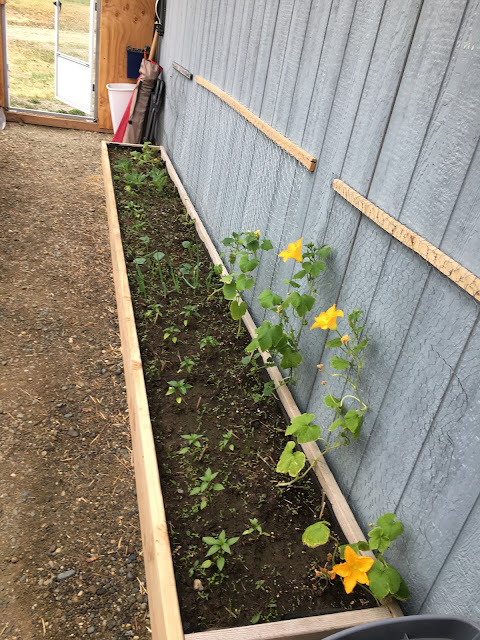 Our pumpkins and squash varieties are blooming and vining.  I'm hoping that what I learned about pollinating them with a little paintbrush is working and we'll get some bounty from these vines.  Our peppers are still small, but the weather hasn't been warm enough for those little guys in the house yet.  There are beans coming up and our Brussels sprout are thriving. 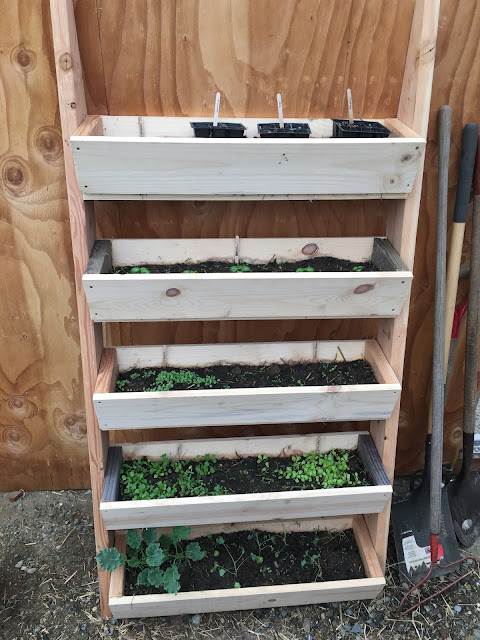 The planter ladder is starting to fill in.  On the right side of that middle box there is some late-starting lettuce.  Buttercrunch is a slow germinator apparently.  Kale in the bottom is starting to fill in with both seeds and a few transplants.  The basil is peaking out of the second box.  The top has plans, but the seedlings aren't quite ready to transplant. 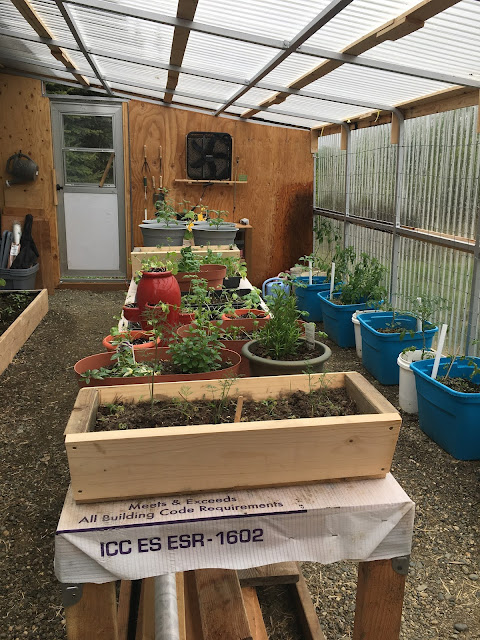 The tables are full.  The front table is full of herbs, microgreens, and lettuce.  I've got dill, mint, rosemary, basil, and cilantro in all these boxes and containers.  I love fresh herbs, but I hate the prices we pay for limp wilted herbs at the grocery stores.  I'm hoping things grow well and I'll be able to dry some for use through the winter. 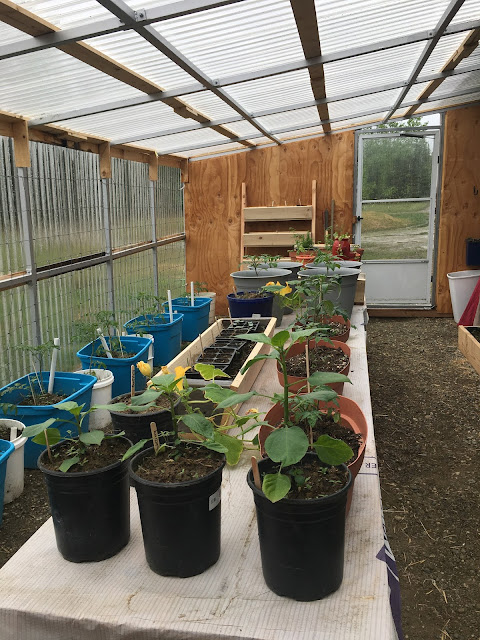 The back table has some huckleberry plants that will go into the yard soon.  There a few seedlings getting a late start - celery, red cabbage, yellow cucumbers, and garlic chives.  There are a couple of squash waiting to go outside, and a few tomatoes.

I'll be back soon with another update.  Hopefully with potatoes planted, corn sprouted and some other things planted it the second square bed.
Alaskan Life Gardening Life Snapshots