June 11, 2020
I've had mixed success with no-knead bread.  Sometimes amazing, sometimes not so much, some more in-depth.  This recipe is nearly infallible.  If you've wanted to make no-knead bread but have been intimidated by the idea this would be a great place to start. 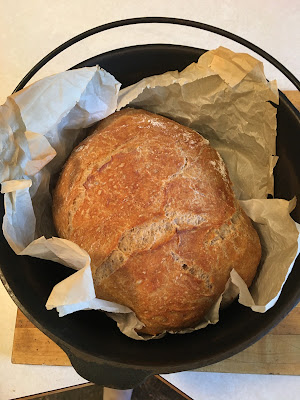 Recipe:  No-Knead Bread
Source:  Glen and Friends Cooking
Level of Difficulty:  Easy
Ingredients:  Pantry Staples
Rating:  ★★★★★
Printable PDF:  No-Knead Bread
This bread is for the crusty crust lovers.  The inside is soft and tender with a crispy exterior crust.  Very much an artisan-style bread.
I put the dough together the night before, right before we went to bed.  Simple toss together, stir and cover.  I opted to use a combination of white and whole wheat flour.  I used 2 cups white with 1 1/2 cups whole wheat.  I also had to up the water a little because of this little swap.
The next morning I did the rest of the steps to make the dough into bread.  I did slide my dough onto some parchment paper before dropping it into the dutch oven.  It makes it easy to put in the pot and easy to take out of the pot.
First time I've ever made bread at 5:30am.  I ended up with a lovely fresh loaf of bread at 7am.  The end result gave me a nice nutty-flavored loaf.  You can really taste the whole wheat.  The crust is crisp, but not overly so in my opinion.  The inside is soft with a beautiful crumb. 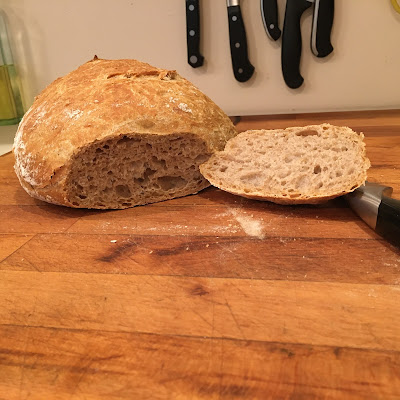 If you want this style of bread you'll need a dutch oven.  I used our cast iron one, but Glen used an enameled one.  I would say as long as it's oven safe you should be good to go.  I think you could also use one of the clay style covered baking dishes.
Would I make it again?  Yes!  You bet I would.  I would make it again and I would make it the night before and bake it the next morning.
I would like to try it with different flours and maybe try adding some herbs to the mix.  Maybe some rosemary and parmesan.  Maybe some nuts and seeds.  I'll need to do a little experimenting.
I'm also considering trying the Foccacia bread idea Glen mentions at the end of the video.  In which case you wouldn't need the dutch oven to bake the bread.
I might even venture to say this could become my go-to bread recipe.  I especially liked how easy this was to make and bake.  The key will be remembering to put it together the night before, not my strongest skill.
Food & Recipes Recipe Reviews