January 26, 2021
It's been a while since I did a recipe review and I thought I'd share one that was a flop in our house.  I usually share my success in the kitchen, while this wasn't a complete flop the Food Whishes Potatoe and Corned Beef Kinishes was a dud in our opinion.  Let's talk about why we feel this way. 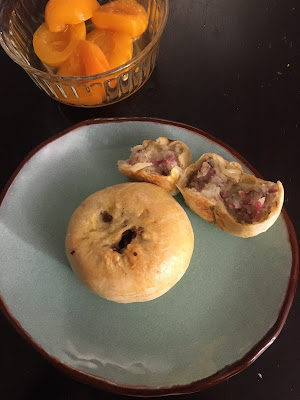 Starting with the dough, I'm gonna be forthright, I thought it would have been better as a yeast dough.  The dough in this recipe, once cooked, has the flavor and somewhat texture of pie crust.  I'm not a fan of pie crust, in fact, I'm the girl that eats the middle and leaves to crust of a traditional pie.  If I were to make these again I would definitely move this into a yeast dough, something akin to my mom's Butterhorn recipe.
Rolling out the dough, was easy, but would be nice if the recipe included a size for the rectangle we're rolling out to 1/8" thick.  Some sort of rough idea would have helped.  My first half of the dough was not quite large enough and made knishes that were much bigger than the second half that I rolled out because my rectangles were of different sizes.
Cutting them apart is not as easy as he made it look in the video.  I had zero success with this method, as my seams never sealed, no matter what I did.  The filling seemed to create a bit of a dough repellant, anywhere there had been potato the dough was not willing to stick to itself to seal the knish.
Now for the filling, the recipe needs to warn you that there may be extra filling earlier in the recipe, not as a side note at the bottom.  The filling itself was pretty lackluster.  We were expecting more of a defined flavor with the corned beef, but it seemed like everything just tasted like potato.  If we were to make this again, I would cut back on the amount of potato and maybe add some cheese.
While we generally love Chef John's recipes from Food Wishes, this one is a one and done.  There will be no repeats, as the first round was so very meh in our opinion.  Sorry Chef John, but we won't be making any more dishes of Knishes in our house.  I'll stick with my German heritage of Kraut-Kealan aka Berox or more commercially known as a Runza.
Food & Recipes Recipe Reviews