March 15, 2021
I started my adventure with sourdough in 2008 when we lived in Missouri. I was learning to make bread and thought it was a great idea to try learning sourdough at the same time.  I won't say it was a mistake, we'll call it a learning experience.
While all of my adventures with sourdough have been a learning experience, they all end the same way.  With a dead starter.  Why?  Because I generally give up on it and end up pushing it to the back of the fridge, later tossing it out as another experiment gone awry.  If I’m brutally honest, they all ended up tossed because it was too much work trying to keep up with it. 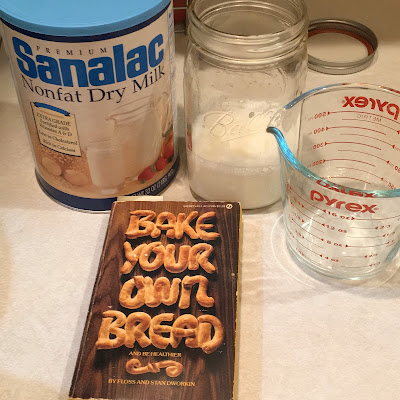 All right so with all of the said, why am I talking about this? Because I’ve started another experiment.  I dug out our copy of Bake Your Own Bread and flipped to the marker.  That marker has been in there since 2008 when I started playing with sourdough, and to be brutally honest the only thing I have ever done from this book is start sourdough starter.  I’m a fan of the taming the wild yeast method.
This book tells you to start with one cup of milk made from powdered skim milk, I use Sanalac.  Letting it sour, which only took a couple of days in our warm house.  Once you have sour milk you stir in one cup of flour. Then you cover the mixture and leave it on the counter to allow it to get bubbly and active.
Now for the gritty details, I started on Wednesday last week.  As I stated above I made one cup of milk with Sanalac, which is 1/4 cup milk powder to 3/4 cup water plus two tablespoons.  I let the milk sour for two days.
On Friday it was sour and the consultancy of jello.  After having a conversation with a friend about the kinds of flour that she’d been told not to use, I opted to experiment with some of the einkorn flour I had left.  I stirred a cup of the einkorn flour into the soured milk and left it to sit overnight.
Saturday, I fed the mixture, knowing I would be using a cup of starter on Sunday to make my first loaf of bread.  In the morning, I stirred in one cup of unbleached ap flour and one cup of whole milk.  I left this mixture to hang out on the counter until Sunday morning.  All that work and I now had a healthy bubbling starter.
Sunday morning, I opted not to investigate an actual sourdough bread recipe.  Instead, I pulled out my trusty No-Knead Bread recipe and used one cup of starter in place of one cup of liquid, and left out the yeast called for. I did not create a sponge as most recipes for sourdough would have you do.  I simply experimented.  After a couple hours, the dough didn't look how I expected it to.  At this point, I added in the yeast the no-knead recipe calls for and left it to raise. 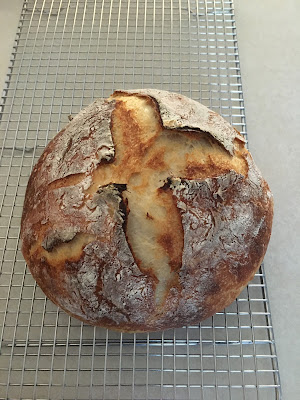 I started this dough at 9 am and at 4:30 pm I prepped it for baking.  There were big bubbles in the dough, but the dough had not doubled in size as it usually does.  We debated making it a loaf or making it into focaccia, in the end, we opted for the loaf.
The end result was a slightly dense, although not as dense as I was expecting, loaf.  It has a nice crusty exterior and a mild sourdough flavor.  Loaf height was definitely not as high as some of my recent bakes, but the crumb is still nice and it's going to make fabulous toast.
After creating this loaf I fed the remaining starter, creating two cups for future use.  I placed it in the fridge to slow down the fermentation process a bit until I make another loaf.  I'll be working it into another loaf once we've consumed this one, so about a week from now.  Since I started baking bread a year ago it has averaged out to about one loaf per week.
With my next loaf, I will try the proper making of a "sponge" and hopefully no use of commercial yeast.  I plan to follow Deanna's Simple No-Knead Soughdough Bread.  If you don't already follow Homestead and Chill you should.  She has an amazing garden and her Instagram is my fave!
Have you tried making sourdough?  I'd love to know, leave me a comment below about your experience.