March 31, 2021
As I write this post this morning, snow is falling from the sky again.  We're also under a winter storm warning.  I'm so over the snow and the winter, yet it's hanging on just a bit longer. 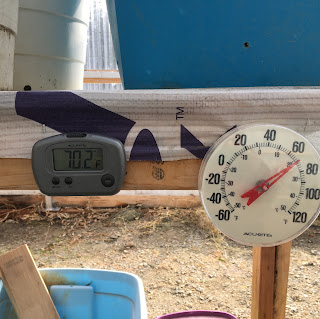 Yesterday, we officially cleared all the snow from the greenhouse roof.  The sun warmed the space nicely and we saw temps hit 70 degrees happen inside.  Then this morning we woke up to snow falling from the sky...sigh.
That said we've been slowly working on prepping the greenhouse for the coming growing season.  I've spent a bit of time cutting all of the dead plants back, after having left them to finish their natural cycle last season as fall and winter moved through Interior Alaska. 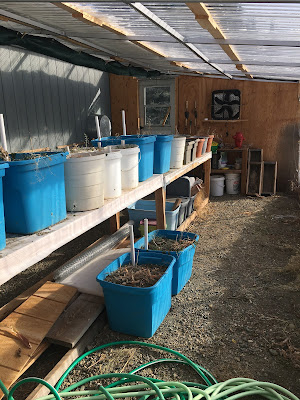 Once the dead tops were cut back we moved all of the containers onto the planting benches.  Getting most of the containers off the ground, or at the very least into the sun, will encourage the soil to thaw a bit faster.  After the soil has thawed we can move to the next step of prepping the containers for planting this year.
The soil in these containers has been used for two seasons and we'll be returning it to the garden to be tilled with compost.  I've not decided if we should use soil from the outside garden beds again this year or if we should invest in some bagged potting soil to fill these containers this year.
The issue with our garden soil is that we are still working to build better soil in the plot.  We've been amending it for over six years, with topsoil and manure.  Our small acreage would be better suited for a gravel pit than a garden.  Not to mention our never-ending battle with the Lamb's Quarters that take over the space each year.  I hope to combat the Lamb's Quarters a bit by trying underplanting with ground cover crops this year. 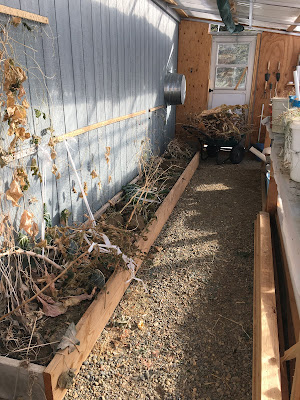 By the back door of the greenhouse sits my wheelbarrow full of dead plant tops, ready to put into the compost bin.  I'll need to clear a path through drifted snow before I can get them there, but until then they'll hang out by the back door.  As you can see I still need to clear the planting box along the left side of the greenhouse, so I'll adding more to the pile anyway.
This large box was added last year, and I plan to amend the soil that is already in it rather than replace it.  Amendments that I'm planning to add include worm castings and some sort of mulch.
Our planting plans this year include filling this bed with tomatoes.  The tomatoes have always been planted along the window wall and because of the pitch of the roof, they tend to run out of room for vining up.
The window wall will be getting a new box like this across the full length of it.  Peppers and a few other plants will get the scenic view this year.  The blue totes will be filling the planting benches and filled with celery and other shorter plants that need greenhouse space. Maybe cucumbers or summer squash will go into a few of the containers, allowing them to vine out and down.
There will be green in the house before we know it, but for this gardener, the green season isn't coming fast enough.