April 16, 2021
Monday the season we all refer to as "breakup" finally began.  At one point in the day I saw 46 degrees and our greenhouse got to 75.  The greenhouse is still too cold at night, but it's coming.  Soon I will be able to move the plant babies from my house to theirs! 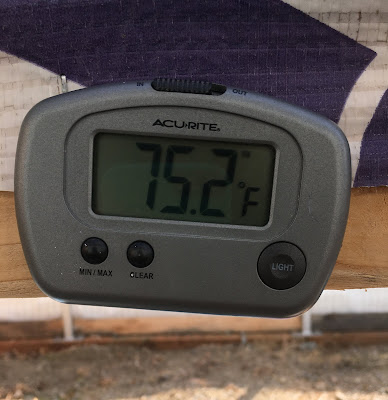 Not from Alaska?  Never heard of breakup season?  The term comes from the way the river ice "breaks up" as the weather warms up.  As things warm up the ice beaks up in big sheets and piles up, it almost looks like concrete sidewalks after an earthquake.  Also with the sheets of ice on the river comes the mud...everywhere!  Some driveways, including ours, turn into swampland or might include a temporary pond in the middle of it.
Breakup can happen so fast that the ground under the snow hasn't tawed enough to absorb the moisture, causing weeks of wet mess.  It can also happen so fast on the rivers that it causes ice jams and flooding.  No one wants a fast breakup, but it happens and it can be extremely messy and challenging.
Our driveway is mild compared to some.  One of my girlfriends literally had a river for a few days last year.  They had to park at the highway and drive their side-by-side to the house with the water at floorboard level.  I think they also had a bit of fun getting out the kayaks and floating the driveway.  Breakup is Alaskan for Spring and we find fun where we can in the mess of the mud.
Last year we had so much water in our driveway that we actually had to pump a "pond" from one side of the driveway to the other to get rid of the stream that was running across the middle of our driveway.  This created a pond in the low spot under our picnic table, as you see in the photo above.  This pond was then had to pump that further into the backyard.
Are you wondering why we'd go through so much trouble to keep plumping water around our property?  It's kind of a double-duty thing.  One we don't want the running water to carve a rut in the driveway and two the standing water will attract the state bird of Alaska to begin laying its larva.  Ok, the mosquito really isn't our state bird, that's a bit of a joke, but no one wants to host mosquito breeding grounds in their yard.
Breaking up is messy, whether in life or in nature.  Get out your galoshes and water pumps...'tis the season to get muddy!