The New Star of Our Kitchen

April 19, 2021
Look at this beauty!  Isn't she pretty?  I'm over the moon excited to have a new larger Kitchenaid mixer, in a shade of my favorite color.  The new mixer package included the dough hook, wire whip, and flat beater, as well as the pouring shield or what I'm calling a flour shoot!  You have no idea how excited I am to be able to add flour now without stopping the machine!  And before you ask, yes I've tried the whole parchment paper trick to funnel the flour in and I wasn't a fan. 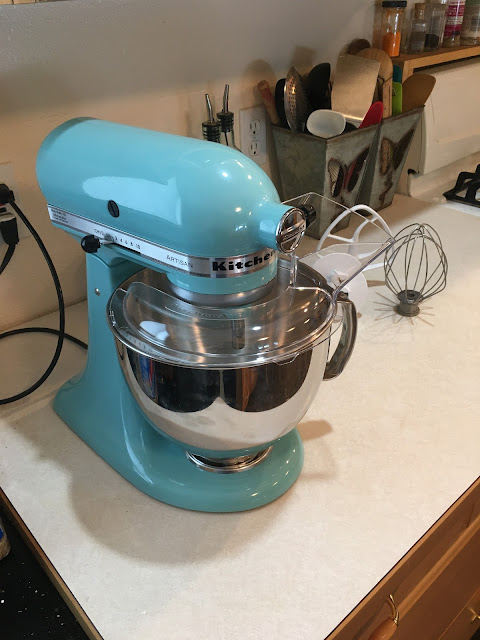 I posted in my Instagram stories about this new addition and I was asked what I planned to make first.  I think it'll be a chocolate cake, as I've been craving cake.  I have a recipe in the draft cookbook for a Vinegar Chocolate Cake that needs testing.  I just might test it using my new mixer.
This isn't my first Kitchenaid, my first one was a wedding gift that I lovingly used for nearly 14 years.  When we did our gift registry we included the stand mixer and several attachments.  We've gotten a lot of miles out of our original mixer, but now it's time for it to head to a new home.  I plan to get another 14 or more years out of this one.
The pandemic really altered how I cook and the things I do in the kitchen.  One year later, and the habits I acquired in that year of isolation are firmly rooted in my kitchen.  I make bread once a week, which we eat every morning for toast.  I make naan regularly and I can't buy hamburger buns as good as the ones I learned to make during all of this craziness.  I also make most of the desserts we consume as well, cookies, cakes, and turtle pies.  Yes, I said pies, hubby loves that pie and I've lost count of how many of those I've made in the last year.
I guess you could kind of say the pandemic forced us to go back to our newlywed food roots, back when I cooked and made nearly everything we consumed.  The circumstances were different, we were broke or if ya wanna be polite about it you could say money was tight.  I started making a lot of the things that we loved eating to pinch a few pennies and save a few dollars where I could.
I kind of lost sight of those roots when we moved here and I took a part-time job, that really end up being all-consuming.  I enjoyed the job, but a job you can never really check out of leads to burnout in a big way.  Just so happens that the pandemic and leaving that job created the perfect storm for rediscovering my cooking roots.  All of which led me to dust off my cookbook projects and reignited the fire of creativity in that corner of my life.
All of this just to tell you I bought a pretty new mixer...