Stories From Our Alaskan Life - The Power Outages

September 22, 2016
This week has been one power outage after another, literally, accompanied by a two-day windstorm that sounded like a runaway freight train.

Let's start with 11 pm Tuesday night.   The Hedy dog got us up to go potty, at which time we discovered the power was out.  Plan of action - let dogs out, set cell phone alarm.  No big deal.  Glad the Hedy got us up.

Fast forward to 5 am, still no power, really glad we set alarm on phone.  No power, no coffee for Hubby's drive to work.  No power, no morning computer time for me.  No power, no electric dog fence.  The largest problem of all - two cars stuck in the garage.  Yes, there is a manual release, but we aren't to that part of the story yet.  I convince Hubby it's not big deal, surely they will have the power on soon.  I tell him to just take the truck and get to work, so he isn't late. 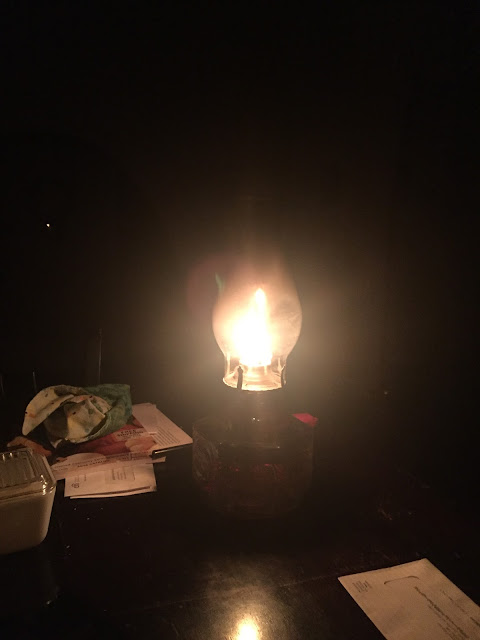 Once Hubby left for work, I set about lighting one of our kerosene lamps and put the kettle on for a cup of somewhat instant coffee.  I say somewhat because they are coffee singles.  They look something like a tea bag, but instead of tea, it's coffee grounds.  I dig out my kindle, do a little reading and check my phone for updates on the power outage.  I learn that they've decided to delay the start to school to 10 am, if the power is back by 9 am, if not school will be closed for the day.  At this point I'm still not concerned, I don't have to be to work until 10 am and it's only 6:30 am.

Time progresses to 7 am and I decide to get dressed and see if  I can get the garage open.  At this point it dawns on me, I can make real coffee in my french press.  We ground coffee the night before and set the coffee pot on auto brew.  All I had to do was rob the coffee from the coffee maker, boil some water, and brew coffee.  Then onto the garage.  I told you we'd get to the manual release.  Pull handle and garage door will open.  Good in theory.  Perhaps, even good in practice, in most homes, just not in ours.  Pull handle, garage door only opens about 12 inches, then jams.  I fiddle and struggle, opening and closing door a few times, get frustrated and go back in the house.  I pour myself a cup of coffee and check my phone, at which point I realize the service I had a 5 am, has now gone to spotty hit and miss.  Fluctuating between "no service" and one bar with 3G.  Making it impossible to place a phone call, and creating a hit and miss situation with text messaging.  I decide I have got to get the garage door open and go out for a second try, to no avail.  We're now creeping up on the 8 am hour.

The prompt decision is made to go to the neighbor's house.  Love our neighbors, I'm always greeted with happy faces and a how can we help attitude in a crazy situation like this.  It's here that I learn the power has been out since about 9:15 pm the night before.  We are less than an hour from the mark of 12 hours without power.

After explaining all my trials and tribulations to the neighbors, the neighbor lady and I decide we'll go to town, hoping for better cell service.  We pull out of their garage and power comes back on for a split minute or two.  We decide that surely it will come right back after it flicks out again.  Back into the house, we go.  Standing in their living room I glance out their front window, only to see Hubby pulling into their driveway.  He had come home to get my car out of the garage, of which he was much more successful than I.  With all the intermittent cell service I never got the texts that he was on his way or that he was home.  Now, I can at least I could get myself to town and figure out what we'd be doing about the scheduled work meeting I had that day.

Pulling into city limits I saw multiple trees down, none affecting roads or power lines.  I pulled into the office parking lot and traipsed into my dark, creepy building.  Whatever did we do before there were flashlights on our phones?  Anyway, into my very dark office to make some calls.  Long story short, school confirmed as canceled and meeting canceled. We're now at the 9:15 am mark.

I made a short stop at a friends house on my way home and enjoyed a short visit.  Once back home, I settled into comfy clothes and a cup of tea.  Noon rolled around and still no power.  Very glad our kitchen stove is propane, I was able to reheat some lunch on the stove.  About now I notice that the house is starting to cool down, but I'm not overly concerned.  It's still 50 some degrees outside, nothing's going freeze, least of all me.  I curl up on the couch with the dogs and snuggle under a blanket.  I doze off, only to be woken with the beeping and humming of our house coming back to life, roughly 1 pm.

With the power came the internet,  I was now able to communicate with Hubby consistently, and let him know things were fine.  I cleaned up the kitchen, ran the dishwasher, put everything on chargers, and took a shower.  I didn't know what to expect, but I took full advantage of the situation, while the power was up and running. 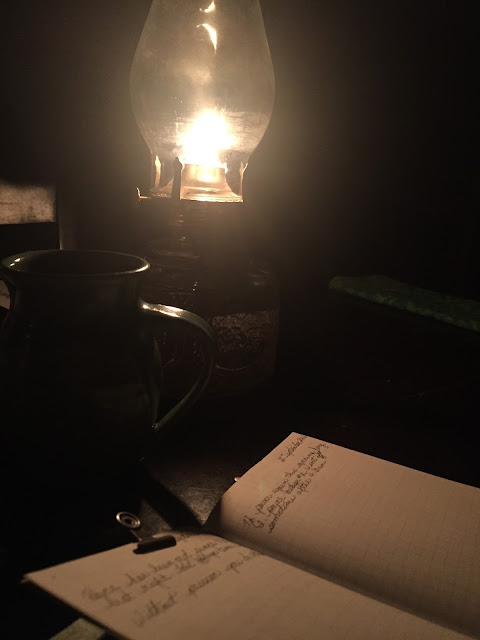 Fast forward to 4:30 am this morning, power still on.  Short while later, Hubby wakes up and mumbles "the power's out again."  I quickly reach for my phone on the nightstand, it's 4:51 am.  I go put the kettle on while Hubby gets ready.  Today, at least I can think clearly and make coffee.  He makes lunch by flashlight and I get down the kerosene lamp again, at least there is no concern about wrestling the garage door.  They were left out the night before.  When Hubby heads to work, I set about enjoying a dimly lit morning of coffee, journaling, and Kindle reading.

The cell service is still intermittent, but texting seems to work sporadically.   Hubby called in the outage from work, they knew it was out and were working on it.  He also tells me that there is power in town.  This is better than yesterday's no-power-anywhere outage.  I got ready for work at 7 am, figuring there was no hope for a shower, and move on with the morning.  I settled in next to our big bay window, for a bit of writing, staring out at the grey morning sky.  Just a few minutes after 8 am our house hums back to life. 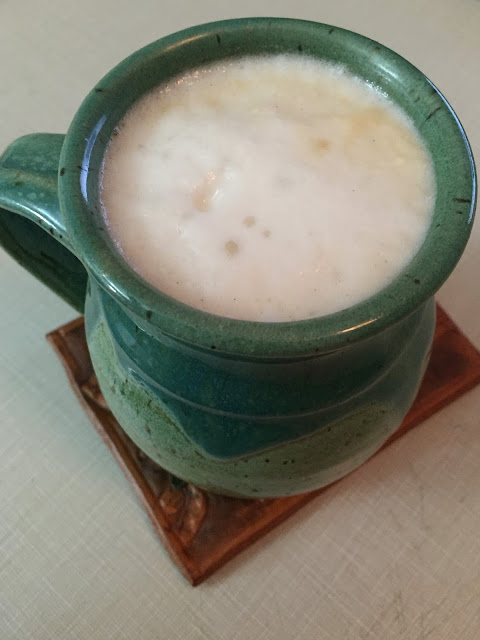 I made a pot of coffee, poured myself a cup, topped it with steamed almond milk.  Downstairs, I turn the lights on in the studio and set about writing this blog post.   Cell service is still a bit wonky, but I have internet and power.  As I sit here writing this, I'm hoping there will be no more outages, but I see the trees and bushes are still moving in the wind outside my studio window.  The joys of living in rural Alaska.
Alaskan Life Life Snapshots