October 11, 2016
Our everyday lives are so full of negative.  We're conditioned to focus on the negative, the can't, the not enough.  Think about it.  You're standing in line at the store, reading the magazine covers - Lose 30 pounds fast, Look younger, Look sexy now.  What does this do?  It paints the picture that you, as you are, isn't enough.

The news media spends most of their time focusing the stories that talk about a torn world; if it bleeds, it leads.  There's political mudslinging on the TV and radio.  Don't even get me started on the condescending, mean memes on social media.

I've been fighting my own battle in my head, focused too much on how hard it is to make the changes that I need to make to get to where I want to go.  Over the past couple of weeks, the universe has been dropping some subtle messages, which I've been hearing, but not listening too.  These are the quotes that I heard, but silently left standing on their own. 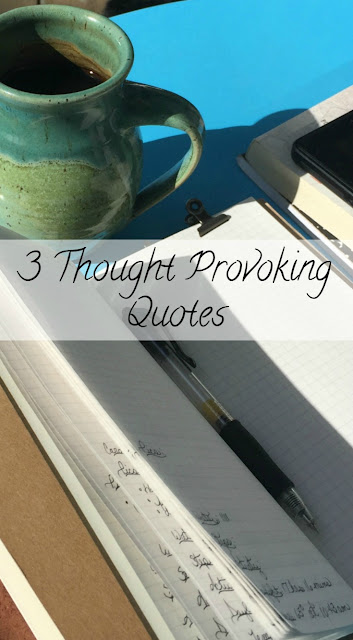 I found the following quote in my Pinterest activity feed this morning.  I posted it on The Porch Postscript Facebook page.  Then I thought about how much this could tie in with my soapbox post from last week.  Is this what's stopping me from embracing the changes I'm secretly craving in my life?  Am I just hyper-focused on what I'd be giving up?  What about you?  Have you been more focused on what you're giving up, than what you could gain?  Does your brain hurt now?  Mine does.

I wanted to share some other inspiring quotes I've heard or read over the past couple of weeks.  Quite honestly, the simplest words often pack the biggest punch.


Start where you are and just keep going
~ Jess Lively
The Lively Show - this episode.

Other people liking you is a bonus.
You liking yourself is the real prize.
~Alex Elle
Peaceful Mind Peaceful Life - Instagram post.

This quote from Peaceful Mind Peaceful Life is something we all need to keep reminding ourselves when we get tied up in what society says we should be.  Something to replay in our minds when that well-meaning friend says something about our outward appearance.  Something to remind the inner critic when that internal voice gets too loud and overwhelming.

Today, I'm pulling them together to build a story.  Start where I am, focus on what I have to gain and embrace myself.  Where are you?  Are you ready to start where you are?