On Living in Alaska

March 27, 2018
WARNING:  This could offend those that love living here.

We've lived here just over six years.  Do I love it here?  Nope.  Will I ever?  Nope.  Let me clarify, I don't hate it here, but I'm not staying for life.  I know there are millions of people watching reality tv shows, itching to live the "Alaskan Dream", but let me tell you there is a HUGE difference between dreaming about living it and actually doing it.

Since we've been here we've seen a lot of people move in and move out, less than a year later.  People up here tell stories about newcomers and those that can't hack it here.  There's the guy who sold his motorcycle because he heard there were no roads in the Interior.  There's the one about the couple who didn't realize it got so dark for so long here in the winter.  There's the wife that wouldn't move here because it's too far to do any "real" shopping.  And there's a zillion stories about the people who left because winter is just too cold.

The first thing I'm going to say is - GOOGLE IT!  With ever one of these stories I wonder if they even tried to find out about the state before they moved here.  Don't move to Alaska to live without doing any research.  No, I'm serious.  Ask before you move.  If you're moving for a job, like we did, ask about the area, the weather, how far it is to hospitals, movie theaters and shopping.  Learn about what's available in the area you'll be living in. 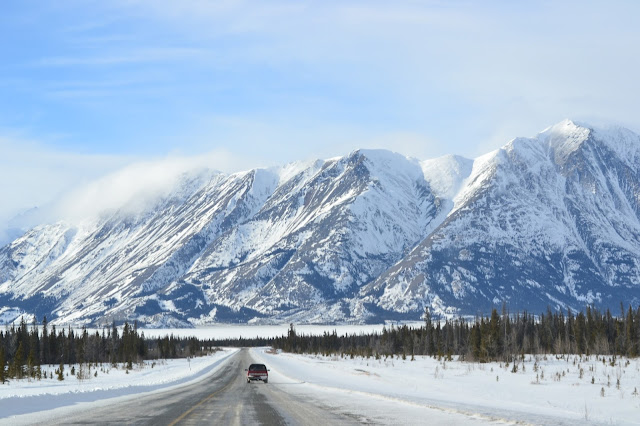 The second thing I'm going to say is - Don't move if you don't adapt well.  Yep.  If you aren't good at adapting to new environments, this isn't the state for you.  There are companies that don't ship here, there are things you won't find here and depending on your location you could be 100 or more miles from the "town", "town" being the closest big city for shopping and such.

We moved for a job.  Plain and simple.  If or when the job ends, we'll move again.  As we always say - we didn't drink the kool-aid.  Alaska is beautiful, but it's also hard.  The winters are long, dark and usually pretty damn cold.  The summers are short, with 24 hours of light, and depending on the season they are either smokey or wet.

We've seen -50 since we've lived here.  Only once and not for a very long stint, but it happened.  We drive 100 miles to the nearest airport and the closest Wal-mart.  We own two snow blowers and plug our cars in about 8 months out of the year.  We've learned to tolerate the moose that eat our garden and hold us and our dogs hostage in the house while they graze on our trees.

Everyone has a battle story of how they moved here.  Ours takes place in February, includes a trip on the ferry and a one day drive through Canada, a stay in a place called Border City, into a town that doesn't rent hotel rooms to people with pets.

I love living in our small town, but I look forward to the day that we wave goodbye and drive out of here.  I've lived over half my life in states where the winter is way too long, the summers are way too short and there really aren't any other seasons.

As I write this it -6 and March is nearly over!  Yes, it's below zero on the morning I am writing this post.  It will warm up today, most likely to somewhere about freezing.  This does not change the fact that March is nearly over and there is very little sign of Spring.  Our yard still has about a two-foot blanket of white snow on it.

Alaska is a state built for the hearty at heart and strong-willed, the rugged individual determined to make it in any environment.  If you love the outdoors, hiking, fishing, snow-machining, 4-wheeling, wildlife and isolation than the Interior of Alaska could be a perfect fit for you.  As for me, I want a place that has 4 seasons, with short mild winters.  Goals...we all need life goals.

I'm glad we took the chance and moved here for the job.  We've made amazing memories and some amazing friends.  So I'll keep living here, adapting and making it work until we find out next adventure...the way things currently stand we have about another seven years, that's when hubby retires and we take the next step in our amazing life that we're building.
Alaskan Life Life Snapshots Reflections

Jefferson School - Missouri ( 28 July 2008) It’s vacant now; the school at the corner of Franklin and Orchard streets, but that morning as I stood, on what remained of the playground, the laughter of school days gone by could almost be heard. The blacktop has faded and the markings for hopscotch have paled with the sun, but the L shaped red brick building stands silent and alone. Of what once was a pair of swing sets, only poles remain, the framework from which swings once hung. Were the swings removed for safety or stolen by vandals, I do not know, but I can tell you no children play there now. Jefferson School - Missouri (28 July 2008) There is a chain looped through door handles, of a double door, on the south side of the school, locked by padlock. Signs remain telling visitors to STOP, Teachers lounge, go to the main entrance. Many window panes bare the scars of a vandal’s rock thrown. Spray paint mars the walls of the lower level on the north side. Blinds are draw