January 28, 2021
At the beginning of January, I picked up my knitting needles after a crazy long hiatus.  I finished the project that had been on the needles for literally years and fell back in love with knitting.  Knitting is a very relaxing creative outlet for me and I enjoy easy patterns that finish in small amounts of time, excluding the times when I put them down for ages.
The Stripy Spring Shawl is a fantastic pattern, with little knitting knowledge needed.  If you know the basic knit stitch and how to increase using the knit in front and back of a single stitch, you'll be able to complete this project without fail.  I enjoyed the project so much that I've made two of them. 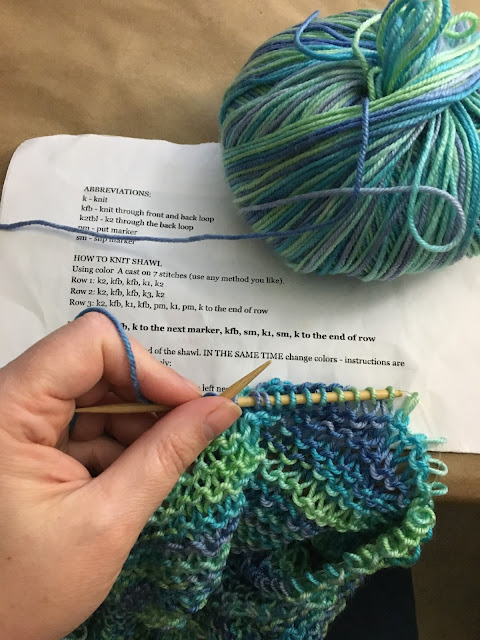 The first version was created using yarn I purchased in Hawaii in 2016, which is when I cast it onto the needles.  I'd picked it up here and there as we crossed those for years, but pandemic times brought me into the grove of finishing a few projects.  This first version turned out beautifully and I had several comments on it the first time I wore it. 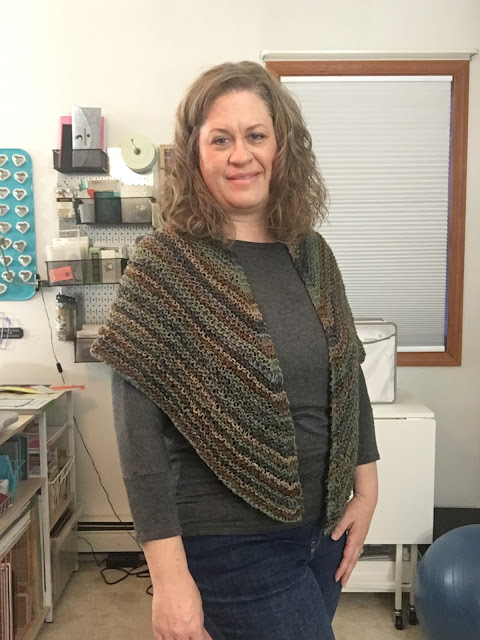 Version number two is created from some Bernat Mosaic yarn that I had in my stash.  The colorway is called into the woods and is a self-striping yarn.  This one took me much less time, knitting an hour or two in the evenings.  Total time took me about 10 days, not working on the project every day.
The pattern is very basic and easy to follow.  I used US size 6 needles for both shawls.  The only critique I would give the pattern is in row 4, which is the repeat row for the whole of the project.  It reads: k2, kfb, k to the next marker, kfb, sm, k1, sm, k to end of row.  I would adjust the directions to read: k2, kfb, k to 1 stitch before marker, kfb, sm, k1, sm, k to end of row.  I've underlined the slight change.  When I created the first shawl I was confused by the wording of the original pattern because most patterns I have worked, have you knit to the marker, slip the marker, and carry on with directions.  Maybe another knitter would have understood this, but I felt it wasn't very clear.
That said, this is a great pattern for a new knitter who wants to make a great looking project without a lot of hard to follow stitches.
Creativity Pattern Reviews